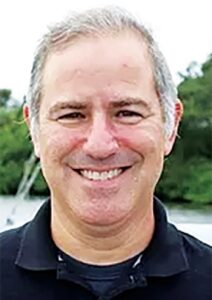 Rabbi Rosenthal joined Suncoast Hillels in 2009 after eight years as the executive director at Cornell University Hillel. With the support of the Hillels of the Florida Suncoast’s board of directors and professional staff, the rabbi successfully expanded beyond USF to the University of Tampa, Eckerd College and Florida Southern College.

Scubi Jew, a Jewish scuba diving club that helps students connect with their Jewish identity through the water, was created at Emory University when Rabbi Rosenthal was campus rabbi there. He introduced it to Eckerd College when he came to the Tampa Bay area and over the years the organization has grown to other campuses.

Tikkun HaYam, Hebrew for “Repair the Sea,” was an initiative he created in 2017 to take the Scubi Jew program to the general Jewish community to raise awareness about protecting and preserving the marine environment from a Jewish perspective.

The concept began to gain traction after Rosenthal’s introduction of the Reverse Tashlich program, with the idea that instead of casting sins on the water as is done at the High Holiday Tashlich ceremony, volunteers would pick up trash on our waterways. “What began with a small beach cleanup by a few students on the Eckerd College campus five years ago ultimately turned into an international event in 2021 that saw 170 teams register to take part in 18 countries with thousands of volunteers. The growth in participation and support for this event, after just a few short years was more than I ever dreamed possible,” said Rabbi Rosenthal.

“We will miss Rabbi Ed’s leadership, wisdom and guidance terribly, but we also know Tikkun HaYam is sure to become his legacy, and for that, we couldn’t be happier for him,” said Sara Ingber, Suncoast Hillels board president.

Tikkun HaYam will be headquartered in the Tampa Bay area.