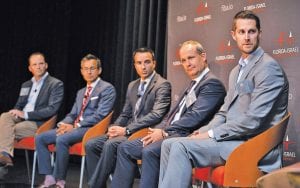 Sports technology – some of it coming from Israel – is a rapidly expanding industry that is affecting the way people across the globe watch, attend and interact with sporting events.

FIBA, under the umbrella of the Tampa JCCs and Federation, works to develop Israeli businesses and help them expand into the Tampa Bay community.

“We want to bring some of Israel’s best innovations and startups to the Tampa Bay region,” said Gary Gould, CEO of Tampa JCCs and Federation.

This year’s Innovation Fusion event focused on how technology is changing the nature of sports. Key players in the fields of business, innovation and sports spoke at the event, including founders of major Israeli startups and leaders in the local sports industry. 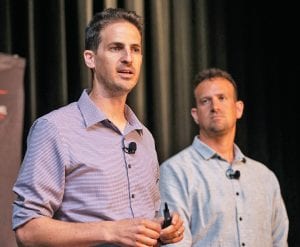 “We are all connected to sports in some way, whether we are the fans, the players, the people employed in sports industries, or the people drinking beer at the games,” laughed Simanian.

He also suggested that innovators look to the current technology industry leaders for inspiration. Since technology is such an essential tool for modern business success, it’s crucial for entrepreneurial leaders to look to innovative technologies in order to stir new ideas and solutions.

Other keynote speakers, Aviv Shapira and his brother Mateo Shapira, co-founders of Replay Technologies, took the stage to add their experience as innovators and business partners in the sportstech field.

Replay technologies produced a new video format that has been adopted at major sporting events around the globe. It helps viewers slow down fast moments in time, watch them from a variety of angles and ultimately judge player performance using the 360 degree viewing technology.

Watching sports games from all sides makes it possible to experience views where no camera is physically placed. The brothers’ goal was to help viewers experience games in a new, immersive way.

“We are redefining what it means to watch and experience sports,” said Aviv Shapira.

Replay technologies was acquired by Intel in 2016. Since then, Aviv Sharpia has taken on a new project, XTEND. XTEND is a human extension platform that uses drones and extended reality technology to mesh virtual experiences and real world atmospheres with extreme accuracy. XTEND makes it possible for users to turn real activities into tech-driven games.

“Think about Skype, but 3D, and you can fly,” said Aviv Shapira.

The brothers both believe that the future of experiencing content lies in extended reality technology. XTEND is currently helping the Israeli Defense Forces to view threats in an innovative and immersive way.

To wrap up the evening, FIBA invited an all-star panel of leaders in the local sports industry to speak. Representatives of the Tampa Bay Lightning, Tampa Bay Buccaneers, Tampa Bay Rays, Orlando Magic plus the Tampa Bay Sports Commission spoke about the impact of technology and innovation on their respective sports.

Steve Griggs, CEO of the Lightning, explained that the hockey team is actively pursuing a culture of innovation. He envisions a smart tech future for Amalie Arena and the Lightning, using apps and Cloud systems to create a digital district in the neighboring area outside of the stadium. Griggs plans to utilize technology as a way to adapt to younger generations’ interest.

For Atul Khosla, chief corporate development and brand officer for the Tampa Bay Buccaneers, engaging fans through mobile experiences and driving social and digital interactions are crucial goals. Khosla said that he hopes to implement more technology to preserve a fun and relaxed game experience – for example, using technology to keep concession lines short. Implementing more player performance analytics and pushing for better fan experiences are at the forefront of Khosla’s vision for an innovative future for the Bucs.

Rob Higgins, executive director of the Tampa Bay Sports Commission discussed the power of social media leverage and digital marketing for modern sports teams. Telling a brand story is crucial, Higgins explained. He is looking into implementing more social rewards programs as incentives to get fans coming back to games.

William Walsh, vice president of Strategy and Development of the Tampa Bay Rays, said that for his team, the one word driving their advances is “speed.” When there’s so much competition in terms of ways to spend time, it’s essential for stadiums and teams to adapt in order to bring fans the best experience possible. One way the Rays are doing this is by going cashless.

“We are the first team in the area to go cash free,” said Walsh. “This provides a measurable reduction in line wait times, which gets people back to their seats faster to enjoy the game.”

As director of Innovation at the Orlando Magic, Jack Elkins said the basketball team is always on the lookout for technological breakthroughs that help the team achieve their goals faster, cheaper and more reliably.

“It’s so great to all come together at this event to explore more options for advancement,” said Elkins.

Following the presentations, Bill Wickett, executive vice president of Communications for the Tampa Bay Lightning, said he found the panel discussion the most interesting part of the evening, but the overall impact of the FIBA event should not be underestimated.

“As a longtime employee in the sports and entertainment industry, it’s always great to see and hear what the other teams are doing,” said Wickett. “These are key initiatives for Tampa Bay, if we want to grow and develop as a community. The more we have here, the more diversity in our industries, the more attractive we become to young talent and people from outside our region.”

The program showcased one of FIBA’s biggest success stories, StemRAD. The Israeli tech company created the world’s first wearable shield to protect humans from harmful radiation, both on Earth and in deep space.

Since the first FIBA Innovation Fusion event, StemRAD has raised over $6 million from investors and the company is on the radar of state officials and the space industry. Florida Gov. Ron DeSantis recently met with StemRAD executives in Israel during his trade mission, where it was also announced that the company had won a research grant from Space Florida in partnership with Lockheed-Martin.

Jack Ross, North American Vice President of StemRAD, also announced to the the Innovation Fusion audience that the AstroRAD vest, a solution for protecting against radiation in space, will be undergoing testing in coordination with NASA at the International Space Station. The vest features symbols of the American and Israeli flags, along with the Tampa Bay Lightning logo. Lightning owner Jeff Vinik, is among the company’s major investors.

“FIBA has been an integral part of our progress and success,” said Ross, who left FIBA as its co-founding executive director to work for StemRAD.