A collage showing some of the victims of COVID on the Faces of COVID Twitter account landing page.

When Alex Goldstein first set out to memorialize Americans who died of COVID-19, he was overwhelmed by the vastness of the task ahead.

That was in March, when fewer than 8,000 Americans had died in the pandemic. Now, with America’s COVID death toll at more than 275,000 and spiking, Goldstein is still tackling the Sisyphean task of documenting the human toll of the pandemic, on his eight-month-old Twitter account, Faces of COVID.

Every night before he lies down, and then every morning when he gets up, Goldstein spends several hours scouring the internet for new stories to share. In 240-character narratives, he shares poignant snapshots of the lives lost along with stories from local newspapers, obituaries and photographs sent by family members.

Think of it as a Portraits of Grief, the New York Times’ post-9/11 memorial project, for the pandemic era – but with the built-in shiva gathering that social media enables. That’s by design,said Goldstein, the founder of a public relations firm who sits on the board of directors of the Jewish Community Relations Council of Boston. 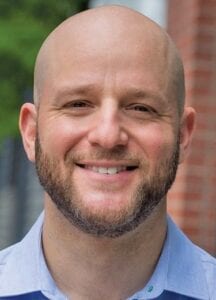 “Judaism is intentional about creating space for mourning and about not hiding from the pain but facing it directly,” Goldstein said. “I feel that in this project. I feel that every day.”

Goldstein crossed the 3,500-story threshold and now has more than 130,000 followers – many fueled, he said, by a desire to transcend the increasing politicization of the virus. As the project has matured, Goldstein has branched out: He recently raised funds to produce videos showcasing first responders and educators who have died, and, in honor of Indigenous People’s Day, Oct. 11, he spent a day highlighting Native Americans who died of the virus. Sadly, since then cases among Native Americans, especially in South Dakota, have risen sharply. Then on Nov. 11 – Veteran’s Day – he was sharing one story an hour on veterans who died.

We spoke to Goldstein about what has surprised him about Faces of COVID, the stories that have stuck with him and how he manages to have hope. This interview has been edited for length and clarity.

JTA: What prompted you to start this account, and how have you approached it?

At the outset of the pandemic I was experiencing what a lot of people were experiencing: As these scary and overwhelming statistics started coming our way, I needed a way to humanize the level of loss that was happening out there. It was just for my own catharsis at first, but I quickly realized that others felt the same way.

I started on my personal Twitter account, but I decided I needed to create a space that was a little more accessible. In the third week of March I had the idea to launch Faces of COVID – that happened to be when both Boston and New York were both getting really slammed. It was really scary outside the four walls of my house and this was a way to humanize the trauma that was happening out there. I can’t believe I’ve been doing this … It’s really grim.

I devote my last hour or two each night and the first hour or two in the morning to sourcing these stories. I do a pretty robust scan of local news outlets: That’s the first place I’m looking for vetted strong sourcing, and it’s also an opportunity to uplift local journalism, which is a passion of mine. I also look for families that self-identify in an obituary that they wrote. The last source and unfortunately a more frequent source over the last few months is people who reach out directly.

I call it the responsibility of memory. What these people are asking for more than ever is to create a space where other people, beyond the isolation of their own mourning, have an opportunity to cry alongside them – even if it is virtual, and even if they are strangers.

What has surprised you most about the project and how it has been received?

The purpose initially was to help people who had not lost someone connect in an intimate way with the abstract statistics. I did not anticipate it would be a meaningful place for people who lost someone to find a space for communal grieving. That has only become apparent as the platform has grown.

A good example was an obituary sent by a woman about her uncle in Tennessee. The obituary talks about how the light of his life was his nieces. Since I shared it and then the nieces shared it, there has been this cascade of strangers who are replying to them. Maybe in a different context – not a pandemic, where we’re able to have the typical rituals of mourning – this wouldn’t be needed. But now, this may be the most condolence calls they’ve received. We’re giving people the opportunity to acknowledge just how awful this is and how somebody who meant something to a whole lot of people is gone now and this hurts all of us.

People are sharing these intimate and vulnerable moments — and there is no scarier place to be vulnerable and share hard things than on social media, which is so unpredictable and has so much potential to be toxic. I’m sure this will boomerang on me, but what has really surprised me is that to this point, the toxicity that has come to define social media and Twitter in particular has been almost completely absent.

In your career and personal life, you’re very Jewishly involved. What do you see as the relationship between your Judaism and this project?

I grew up very much engrained in Boston’s vibrant Jewish community. I went to Temple Emanuel, I was bar mitzvahed there, I went to Brandeis for undergrad, so I have always felt deeply connected both as a Jew but also to the community at large. I’m on the board of JCRC (the Jewish Community Relations Council).

One thing I always found powerful about Judaism and our tradition is the way in which we approach grieving and mourning, which is not to say, “They’re in a better place,” but to interface in an intimate way with the pain and grief in the moment, with what it feels like to lose somebody, to say it’s OK to be angry and to cry and to scream.

I lost a good friend a couple of years back and after she passed away I talked to a rabbi I am close to – Bill Hamilton of Congregation Kehillath Israel in Brookline – and one of the things he reminded me is that Judaism is intentional about creating space for mourning and about not hiding from the pain but facing it directly. I feel that in this project. I feel that every day. Part of the responsibility I feel is to make these stories visceral and real because that is not only a more compassionate and empathetic way to deal with a crisis like this, but I think it’s also what forces us to ask hard questions about what was inevitable and what wasn’t.

Many of the stories we’ve shared are people in the Jewish community, whether from the Orthodox communities in Brooklyn or Monsey (New York) that were hit so hard in the earliest days to communities that are small but mighty like Columbia, SC.

I think about this couple, David and Muriel Cohen, who lived in a Jewish nursing home in Longmeadow, MA. David liberated a concentration camp in Germany and he and his wife died within days of each other of COVID. It was one of those stories that puts your heart in your throat – you say to yourself, how badly have we let these people down? These people are heroes of this country and they were just swept away by a virus that, while we didn’t understand it, we knew it was coming. I think about them a lot. I think about the Holocaust survivors – to survive that experience and then to be let down so horribly – you get my point.

Are there other stories that have stuck with you?

Absolutely. This is someone who reached out directly to us – her name is Carol Ackerman, and her father Stanley died. I was reading what she sent and I felt like I knew him. He was a 70-something Jewish grandfather who was living in Florida. He was supposed to go on a family trip to Israel this spring that didn’t happen. He was an immigrants rights advocate and lawyer in New York for years and he just had this awesome story. I thought: I would have loved this guy. We would have hit it off and talked for hours. His daughter is an EMT and in part because of Faces of COVID has started to be more outspoken. I think about her and her dad a lot.

One of the reasons that this is so powerful is that you see yourself and your family and your friends in these stories. You don’t have to know the people to know them.

What are your takeaways, particularly amid the rapid current growth you’re seeing?

There are a number of news outlets and efforts that are trying to chronicle some piece of this – educators, or medical professionals, or people in a specific city. I haven’t seen anything also that tries to wrap around the entire scope – about how this is literally in every corner of our lives, and how the types of people we are losing is reflective of our country. These people are rural and in cities, old and young, people with medical issues and people who were healthy. That reflects the nature of this virus – it is indiscriminate in many ways, except that it has disproportionately affected Black and brown communities across the country, which is not what you would see if you read the obituary page. The history of this moment is being written right now and the volume of stories we share helps to make sure it’s written accurately.

But this isn’t a scientific process: We’ve only shared a little over 1 percent of the total. Still, you start to get a feel scrolling through of just how expansive and overwhelming the loss is and how there’s every type of story you could imagine. It’s emblematic of the country.

I genuinely see this effort as being also about accountability. We have made so many grievous errors, so many of them intentional, in terms of the federal responses, and every one of these stories begs the question of whether this person had to die or whether their death was preventable.

What makes me hopeful is what happened when I tweeted out just a couple of words: Why do you follow Faces of COVID? We got nearly 1,000 responses, and they will restore your faith in this country if you read them. They show an army of empathetic souls who will not allow people to feel like they are on their own right now and that gives me a lot of hope.