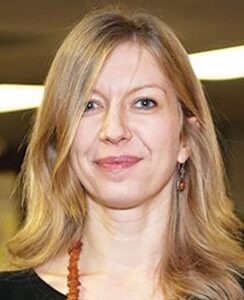 Ursala Szczepinska is a detective for survivors of the Holocaust.

In her role as director of research and education at Florida Holocaust Museum (FHM), she spends a lot of time with survivors searching for answers to their unanswered questions – usually revolving around what happened to their friends and family during the Holocaust. Her work for survivor Mary Wygodski was a little different. She found her true name

Szczepinska has worked for 18 years with the FHM and has been discovering and uncovering documents for Holocaust Survivors since she started working there.

Recently, she found documents for Mary Wygodski, a Holocaust survivor who lives in St. Petersburg. Wygodski had no documentation of her given name, and Szczepinska found those papers for her (see story on front page).

On finding Wygodski’s birth papers, Szczepinska said, “I have used birth registers before, so I knew what to look for – the big question was whether this particular register survived.”

Wygodski was born in the turbulent area of Vilnus that changed sovereignty several times, and hope that the documents still existed had been low. Szczepinska said it took her a few weeks to find the information on Wygodski’s birth name. The fact that the documents still existed surprised Szczepinska and shocked Wygodski and her family members. Szczepinska says she is working to figure out how the papers survived when so many other documents from the area have been lost.

Szczepinska’s search for documentation of people and communities that have been previously lost in the Holocaust is an involved process that spans many languages and databases.

“Each case is unique and requires specific steps. I search through available digitized collections that include documents from before, during, and after the Holocaust. Some of these collections are word indexed, some are not. Usually, for each case study, I review thousands of documents in different languages and look for a trace of information pertaining to the person whose experiences I’m investigating,” Szczepinska said. Szczepinska knows several languages, including Polish, which is the language she sifted through to find Mary Wygodski’s documents.

For Szczepinska, the work that she does is fulfilling and important. “A survivor’s memories are the only place people and communities that are lost [to the Holocaust] live,” she said.

Szczepinska says she is continuing research with other Holocaust survivors because, “retrieving identities of Holocaust victims is part of our museum’s mission.”