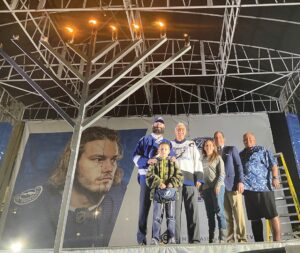 Amid a widespread rise in antisemitism in North America, the Tampa JCCs and Federation has joined an unprecedented coalition of over 60 American and Canadian Jewish and non-Jewish organizations and corporations to launch Shine A Light, an initiative to illuminate the dangers of antisemitism.

The Shine A Light initiative seeks to spark conversations in communities, on school campuses and in the workplace, so that people will better understand what constitutes antisemitism and take steps to respond. The coalition launched in early December, during Hanukah, using the powerful story of the Festival of Lights to champion the message that light can dispel darkness.

As a local member of the coalition, the Tampa JCCs and Federation introduced the Shine A Light Youth Art Contest. The art contest was developed to raise awareness of antisemitism, share educational resources, and to empower individuals to stand against the hatred of Jewish people and mitigate ignorance through the power of art. Middle and high school students are invited to submit original artwork on the theme of reflecting, preventing and combatting antisemitism. Registration opens in February 2022. Youth of all backgrounds are encouraged to participate. Winning artwork will be featured in venues throughout Tampa. Cash prizes will be awarded.

Jen Goldberg, executive director of Jewish Learning and Combatting Antisemitism at the Tampa JCCs and Federation, announced the art contest during the pre-game festivities for Jewish Heritage Night at the Tampa Bay Lightning.

“ This past Hanukkah, we were immensely proud to Shine A Light on antisemitism, which still exists in our society, in polite conversation and in more dangerous and insidious forms,” Goldberg told the crowd gathered in Thunder Alley at Amalie Arena for the lighting of the menorah. “Through the Shine A Light Youth Art Contest, we are conveying in no uncertain terms that it’s up to all of us to be aware of antisemitism – and take action against it. Just as you’d reject any other kind of hate, reject antisemitism. Help send a message that hate won’t be tolerated in our community. ”

In 2020, according to the FBI, 55 percent of all religiously motivated hate crimes were against Jews, who make up just 2 percent of the U.S. population. One in every 4 American Jews has been targeted by antisemitism over the past year, and nearly 4 in 10 reports changing their behavior for fear of being identified as Jewish, or for their safety or comfort as Jews.

The Shine A Light effort to increase awareness and action against antisemitism is unmatched in recent history with a coalition of major advocacy groups and corporations.

To find out more about the local Shine A Light youth art contest, visit www.jewishtampa.com/shinealight or email jen.goldberg@jewishtampa.com